Hindsight can ironically make it hard to conceive just how revolutionary the changes of the Bronze Age were for the people living in Europe at the time. If we imagine a world without metal, we imagine most of the human past. But then, over the course of a few hundred years, what was once a prestigious material used by the small few in society who could control access to it, came to be used by almost everyone and for even the most mundane tasks.

Perhaps most surprisingly is that this ancient metalwork was so much the same everywhere in Europe – from Ireland to Ukraine, and Norway to Sicily. Now, we archaeologists have expended much energy in describing the nuances of the differences, and there are many, but the range of tools that were in use by around 1200-1000 BC were incredibly similar throughout Europe. Axes had hollows and loops to lash a wooden handle to, hammer had sockets, swords had the core of handles cast as one piece with the blade, cauldrons could be used for cooking, sickles were used to cut crops, small chisels were available to carve wood and so on. While there were locally specific things also, this general range of ‘sameness’ on this scale was something very new for Europe.

Another thing that people shared was the way in which they put some metalwork out of reach of the living. They intentionally deposited collections of metalwork in the ground, although the reasons for this varied even within a single place, there was nonetheless a common thread to this. It is two of those hoards that I want to look at because together they give us insights into some common features of metalworking in Europe. This is interesting because (if you believe me!) it means that people in very different parts of Europe shared quite specific understanding about crafting the tools and weapons that were a key part of their lives and livelihoods.

As archaeologists, we often place a rather ephemeral character of “the smith” on centre stage for metalworking, but for our present purposes, we can simply consider these hoards to contain tools suited to some aspects of making objects from bronze. But I can come back to that, let’s first introduce our hoards – the Bishopsland hoard from Ireland and the Boljanić hoard from Bosnia-Herzegovina. These come from quite opposite sides of Europe, though they are both dated to around the thirteenth century BC, so a relatively tight window in terms of the course of the Bronze Age. If we are thinking of a broadly European tradition of metalwork, I believe these can help us to identify some elements of the workflow of making this metalwork that are shared very widely. I suggest these hoards are useful for considering this.

Click on the above images to activate an interactive 3D model. You can click on the orange box to open this in a new tab

Hoards can contain a wide variety of complete and broken objects, but these two are of particular interest for the complete objects they contain. What spiked my particular interest is how incredibly similar the range of complete objects is. This in some ways is visible in their shapes, but when we think of their possible functions, the similarities become all the more striking. Also, in both hoards, many of the key objects listed only occur in one or two instances in the hoards – i.e. these are not bunches of random material, but appear more to be like a tool kit with specific tools suited to specific tasks.

Each hoard contains: One or two anvils, socketed hammers of varying (but not repeated) size / weight, a C-shaped clamp, a gouge or small chisel, a rod of bronze with a pointed tip and a flat tip, a small saw, a range of chisels, one or a few sickle blades, hooked bronze wires, bronze rings, and a range of scrap including wire. The tools are known from other hoards and individual finds throughout Europe, though not in such distinct packages as these two. The striking similarities in the functional range of tools, and the tasks they were suited to, suggests a similar range of solutions to technical challenges – making the characteristic metalwork of the European later Bronze Age. We should be cautious of course by being cognisant that hoards were not made in the past for our benefits, these were put together for reasons that remain elusive to us. We can see this by virtue of the fact that the objects, and by extension practices represented, found in these hoards occur widely throughout Europe. We can never know why these hoards were assembled or whether the tools all came from a single workshop, but all that aside, their very complementary functions suggest they at least symbolise, but are more probably actual, functional tool kits used for what would have been a recognised package of craft practices. I find this association particularly exciting, because alongside sharing similar forms of objects across Bronze Age Europe, this suggests that the ways of crafting bronze objects and their organic accouterments shared close similarities across a very large geographic scale and across cultural boundaries. 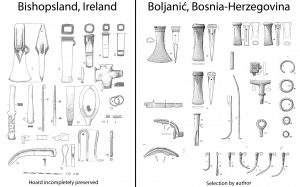 So if we think of these two hoards as actual intentional tool kits, buried with some of the scrap metals their users may have been utilising, then what can this tell us? Well first of all, it seems relevant that the small saws, small chisels and the somewhat larger axes / chisels were all suited to working organic substances, like wood or bone. The very characteristic tools with one pointed and one flat end are somewhat enigmatic, but could find a role in working or decorating leather or wood in particular.

The enigmatic C-clamp from Bishopsland was for a long time considered quite unique, and its suggested uses included twisting gold to make the beautiful twisted gold ornaments of the Irish later Bronze Age. While the Boljanic piece is somewhat different in design, its function appears similar and it is interesting that the twisted gold work of Ireland is missing from that region. Whatever their uses, there is still more to explore with these tools! 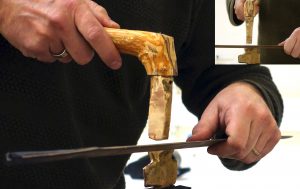 Hammering the edge of a Late Bronze Age sword blade (courtesy of Neil Burridge) at the UCD Centre for Experimental Archaeology and Material Culture using a replica of a Bishopsland hammer and anvil.

The anvils and hammers at face value appear to be suited to working small and delicate objects, but this need not be the case exclusively. The bladed objects of the Bronze Age, from swords to axes, required delicate work along their edges to draw the edge out and harden it in the process by hammering the metal when it was cold. The historically anomalous hammers with peaked facets could well be suited to this kind of hammering and drawing action. A long standing suggestion that these tools, the anvils in particular, were mainly for gold working is not really a necessity. These are simple tools for percussive work that could have served a wide range of craft work that required small scale modification to small areas of objects. The Bishopsland hoard even contains a graded range of lighter to heavier hammers! This gives us some insight into the technical skills and knowhow of these metalworkers, and the deep understanding they had of the mechanical properties of their materials without any of the benefits of modern science.

So what we have in both cases is a set of tools suited to modifying the small objects and the edges of small and large objects, from chisels to swords. The other tools are not really suited to chopping down trees but are well suited to working smaller pieces of organic substances. When we look to the Bronze Age tool and weapon repertoire, quite a large proportion of these require organic pieces for their handles in particular, or perhaps also for now lost sheaths to carry them in. It seems to me that there is a good case to be made that these are the tool kits for finishing off objects, after they had been cast. That is tidying them up by removing flashing from the cast, hammering features into shape (including edges), and then equipping them with handles. Whether this sequence of actions was all undertaken by the same person or persons remains to be seen.

A further point of interest is the life cycle of these objects. A socketed hammer from Bishopsland had been broken and then repaired, thus prolonging its life. A socketed chisel from Boljanic had (probably) been transformed to be used as a socketed hammer. The anvil from Bishopsland appears to have been quite worn through use, with the edges of the anvil face flaring out even more from use than they appear to have been when originally cast. The users of these tools certainly seemed intent on keeping them in use for a period of time. Were craftsmen particularly attached to specific tools that they had used for a long time and so repaired them to maintain familiarity and uniformity in their actions? Or was it that despite working in part of the metal production cycle, they were not masters of all elements and so did not know how to cast and replace worn tools?

Both of these hoards are interesting in their own right and in their own cultural context, but taking them together and looking at the wider European picture, we can see that they represent similar ways of doing a similar range of tasks to achieve similar ends. They were not the same, of course. But the similarities indicate a similar range of understanding not just in seeking to achieve related goals but in the paths that were taken to get there. That they come from such distant parts of Europe is fascinating. This is made all the more interesting because parts of this puzzle occur in a more fragmentary state in the lands in between them – a hammer here, a saw there, an anvil here – which may suggest that tool kits associated with particular activities were part of a more common understanding of the organisation of metalworking and appropriate stages of even division of labour in this. So despite their differences, the similarities in these two hoards means that considering them together may shed new light on the mysterious world of the makers of bronze tools and weapons that enthral millions of people in our museums every year.

4 thoughts on “A tale of two hoards: Looking for prehistoric metalworker’s tool kits in Ireland and Bosnia”